Meet Bibles for Canada. We love the Bible and we want to share our love for the Bible across Canada.

Our heart is to help you know God and understand the Bible in a deeper way, so we give away free copies of the New Testament Recovery Version and Christian books by Watchman Nee and Witness Lee. This study Bible and the works of these Christian authors have revolutionized our Christian lives, and we want to share them with everyone we meet.

For the earth will be filled with the knowledge of Jehovah, as water covers the sea.

Read our full Statement of Faith to find out more.

In 2004, a group of Christians began praying concerning the possibility of freely distributing within Canada a unique study Bible of the New Testament called the Recovery Version. For many years, they have benefitted from this study Bible. They began to develop a burden to share this so that many others can also obtain much spiritual nourishment from it. This group of Christians envisioned establishing a similar organization modeled after Bibles for America (BfA), which has been in operation distributing the same study Bible.

As a non-profit organization, our goal is to freely distribute many copies of this study Bible in Canada along with Christian literature by Watchman Nee and Witness Lee to hungry seekers. With the help of many volunteers, Bibles for Canada has been spreading the Word of God all throughout the country, especially in major cities such as Toronto, Montreal, Vancouver, Calgary, Winnipeg, Saskatoon and Halifax.

Giving away free Bibles and books is only the first step. We hope many seekers will be drawn to Christ and that the Word of God will be opened to them so they can experience God in their daily living.

May the Lord continue to spread His Word throughout Canada! 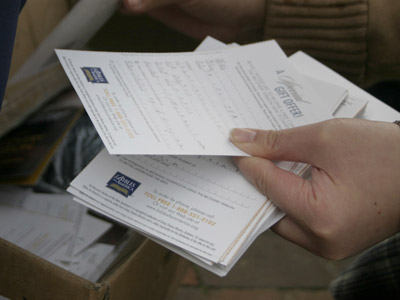 Have questions, concerns, or feedback?

Check out our FAQs, or feel free to contact us. We look forward to hearing from you!